If you’ve grown tired of the Google Assistant voice, you can now choose from a fresh new batch of voices.

Google and Amazon are the leaders in the digital assistant market and have competing features. During this year’s Google IO developer conference Google announced it is adding new features to its digital assistant, some of which are already available. One of the new features is the ability to choose from six new voices for it Google Assistant. If you’ve grown tired of the traditional robotic sound of Google Assistant since it’s inception, here is a look at how you can change it to something else.

To change the voice open Google Assistant on your phone or tablet and tap the ellipsis in the upper-right corner of the screen. The navigate to Settings > Preferences > Assistant Voice. 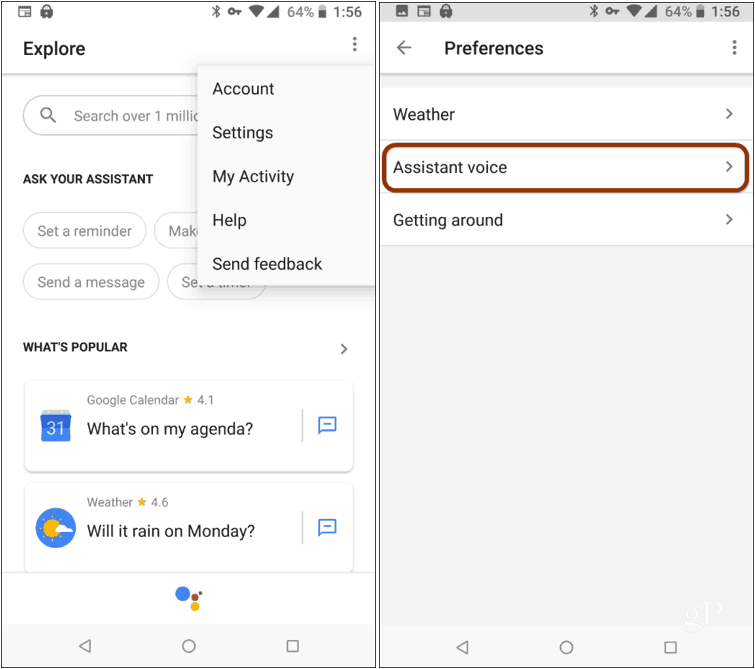 There you will be able to choose from a list of the eight voices currently available for your device. There are four male and four female voices to choose from. To hear what each one sounds like, just tap the speaker icon next to it to get a preview of the voice.

Keep in mind that the voice you select will be the same on each of your Android device’s – including a Google Home speaker — provided you’re logged in with the same Google account. Also, if you have multiple user accounts, each person can choose their own preferred voice for the assistant.

It’s also worth noting that if you’re using an iOS device, changing the voice is virtually the same. Open the Google Assistant app and head to Settings > Preferences > Assistant Voice. Again, if you’re logged in with the same Google account, whichever voice you choose on iOS will be the same on Android and vice versa. Also, the company announced it will start adding celebrity voices later this year starting with singer John Legend. The celebrity voices won’t be the mainstay for the assistant, but will occasionally chime in with answers to your queries.

If you’re still not satisfied with Google Assistant, remember, you can always make Cortana or Alexa the default assistant on your phone.