Google has posted the most recent Android distribution numbers to its developer website, and they clearly show that Android Jelly Bean is gaining some serious traction compared to older versions.

Collected based on devices visiting the Google Play Store (they used to be based on devices checking in to Google’s servers), the stats show that the world’s most popular mobile operating system, both in Europe and all over the world, looks like at the moment.

Namely, based on data Google has collected over the last 14 days before the beginning of the month of August, Jelly Bean is extending its lead among Android versions – combined, all versions of Android Jelly Bean are at 40.5 percent at the moment. In last month’s stats, Jelly Bean was at 37.9 percent. 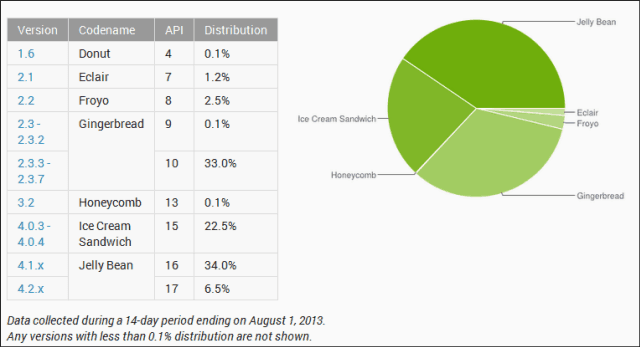 Gingerbread is still second, at a little over 33 percent, which constitutes a drop of one percent from last month. Third is Ice Cream Sandwich, which has 22.5 percent of Android devices having accessed the Google Play Store. However, ICS has also dropped a little compared to last month, when it was at 23.3 percent.

There are still devices running Froyo, Eclair and Donut, but in pretty negligible percentages – 2.5, 1.2 and, respectively 0.1 percent. Other versions, which don’t even show up in the pie chart are at under 0.1 percent.

What we can make up from this data is that Jelly Bean keeps going up, although manufacturers don’t seem to be too fast at updating their devices to its last version – only 6.5 percent of the 40 percentage points account for Android 4.2.x versions.

The fact that a flavor of Android (namely, Jelly Bean) is steadily heading towards running on almost half of all Android devices seems to put an end to all those people using the fragmentation argument against Android. Now, if only device manufacturers would work on providing updates faster…