Android 9.0 includes Google’s “Digital Wellbeing” tools to track screen time. A similar feature is in Microsoft Launcher and works on Android 4.2 and above.

Earlier this year, Google announced it was adding a digital wellbeing initiative at its Google I/O conference. The company is adding new features to its apps, devices, and services to help users manage their time better. The company has a screen time tracking feature in its ninth-generation mobile OS, Android Pie 9.0. And now Microsoft has added its own digital health section to its Microsoft Launcher for Android. It will keep track of your screen time, app usage data, and more. Plus, it works on Android 4.2 and higher which opens up the feature to a lot more users.

You will find the new screen time section under the Glance section in the revamped Your Feed page. On the initial card, you’ll see your total screen time for the day and a colored bar graph showing which apps you’ve spent the most time with. Tapping on the card will give you a more detailed breakdown of your total screen time, most used apps, and the length of time you have spent on each one. You can view your usage for a single day or look back at the past week of use. 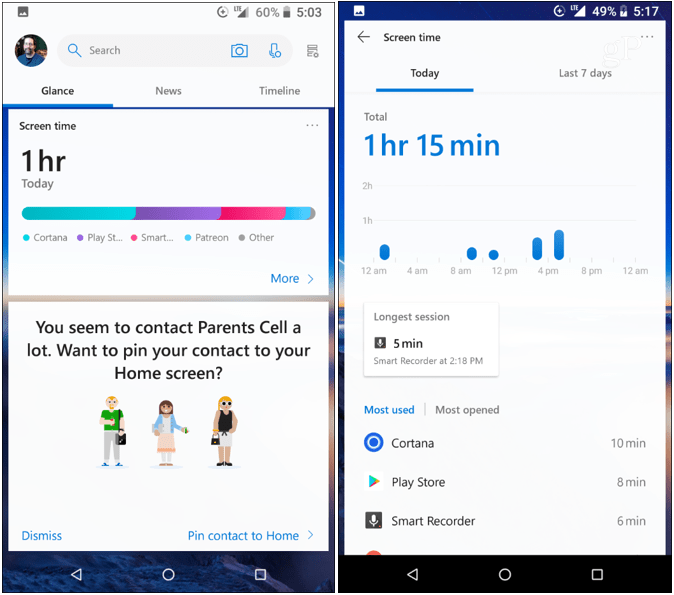 The company has been adding new features to its Android launcher over the past few years. One major addition to version 5.0 was the addition of Windows Timeline support. And in addition to the new screen time feature, the latest 5.1 update includes To-Do and Sticky Notes integration which allows you to sync your tasks and notes from those Windows 10 apps on your PC.

Since killing off Windows Phone, Microsoft has increased its focus to providing apps and services in the mobile arena – most notably with Android. For example, with Windows 10 1809 an above, you can use the Your Phone app with Android to sync texts and photos between your phone or tablet and PC.

If you’re a Windows enthusiast moving to Android or just looking for a better launcher, the Windows Launcher has a ton of features and configurations. These latest new features are currently available on the beta version of Windows Launcher and will be rolling out to everyone in the coming weeks.