If you’re doing simple tasks on your Xbox and don’t need the bulky controller, you can use your phone as a remote instead. Here’s how.

If you’re an Xbox One owner, you know that sometimes using the controller for apps other than gaming can be a bit cumbersome. Especially if you’re just watching videos or want to use the Edge Browser. The good thing is there is the Xbox app (formerly SmartGlass) for your phone. There are a lot of things you can do with the apps, especially when it comes to interactions with the Xbox community, but here we’ll take a look at how to use it to make your phone a remote.

Control Xbox One with Android

The first thing you need to do is download the Xbox app for Android from the Play Store. It’s worth noting that it’s also available for iOS and Windows 10 PCs.

After installed, launch the Xbox app and sign in with your Microsoft account credentials. To connect the two devices, tap the menu (hamburger button) on the upper-left corner of the app and choose Console from the list. Then the app will scan your network for the Xbox connected to your network. Tap on your console and then Connect. You can also choose to connect automatically to make things easier in the future. 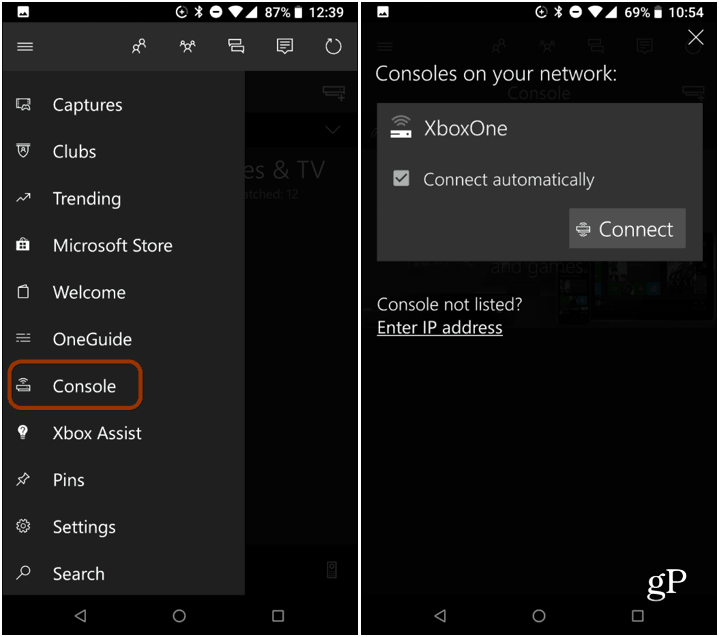 If your Xbox isn’t discovered, make sure it’s connected to the same network and powered on. If you still can’t find it or have a special network configuration, it allows you to manually enter the IP of the Xbox. Similar to using a custom DNS on your Xbox, you can find the IP address of your console by heading to Settings > Network > Network Settings > Advanced Settings.

The remote has the Xbox button to get the main menu and the ‘B’, ‘Y’, ‘X’ and system menu buttons. You can do simple things like navigate through the Xbox UI and other apps, see TV listings via OneGuide — if you have your console set up — or browse on the big screen using Microsoft Edge. I prefer the app when using Edge on Xbox since you can use onscreen keyboard versus the clumsy controller – and it’s easier than connecting a physical keyboard. However, you can’t use the onscreen keyboard to search in non-Microsoft apps like Netflix, for example. 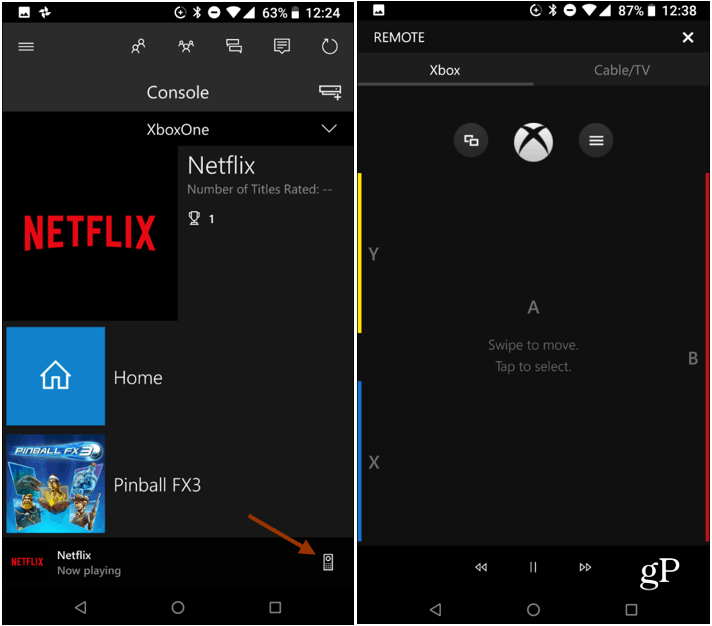 This certainly isn’t going to replace the controller, but it does come in handy for simple tasks like movie and music playback. You can also use it to navigate other video apps like Netflix and Amazon Prime Video. If you’re a Spotify user, it’s probably easier to use the Spotify mobile app with Xbox, though. In the end, it’s free, is just fine for simple tasks, and there’s no need to buy the Xbox One Media Remote.