The Google Maps Android app has received its latest update, which Google is currently rolling out gradually to users around the world. Android users will be followed by iOS ones. 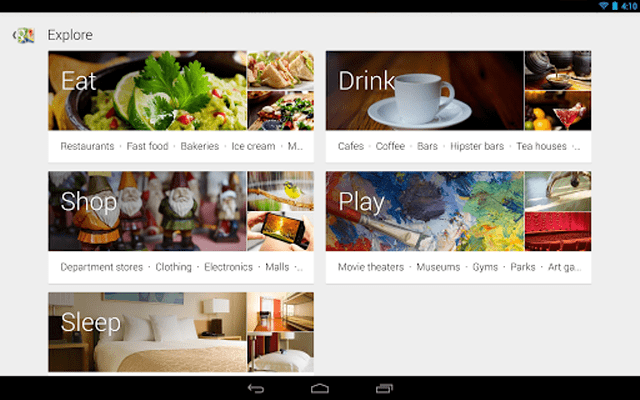 If you haven’t yet received the update, expect it on your Android smartphone or tablet soon enough, according to Google’s blog post announcing it. And there’s every reason why you would look forward to it, as the new update seems to make things more social for users of the app, allowing them to easily discover new places, as well as to know more about the interesting locations around them.

Here’s what the new update will bring you, the moment you get it (apart from the fact that it retires Google Latitude, the feature which allowed other users to see where you are, altogether).

First of all, the new explore mode, shown in the image above, allows you to find places without even trying. It seems to be yet another variation on the theme “get stuff you want before you know you want it”, that Google uses so well with Google Now.

Navigation has also been enhanced on the app (which needs Android Ice Cream Sandwich or Jelly Bean to run on your device in order to work) so, for example, you can now re-route your trip if there are traffic problems along the way.

The interface is also completely redesigned, with a new tablet look, and finding good places to eat or have fun in is made easier by the fact that a rating system is included, as well as curated lists and the Zagat badges of excellence. This means that you won’t have to go into the first place you find around you and hope for the best, as you’ll get to easily find the best restaurant.

To get a better idea about the new update, check out the video below, which shows you how the app rocks in more ways than one.