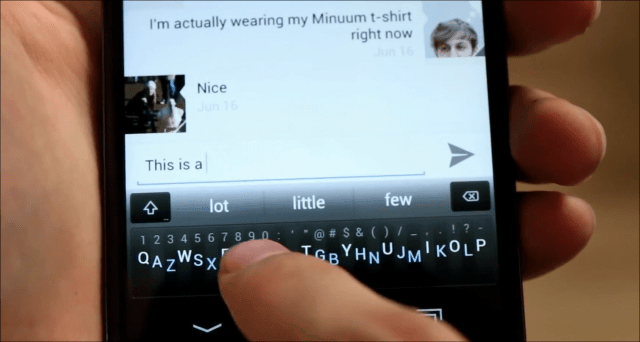 The Minuum Keyboard, which was the subject of an extremely successful indiegogo campaign, is finally available to all Android users. Find out the price and what it offers.

The Google Play Store (or, even better put, Android) does not lack alternate keyboards – there are quite a few of them out of there, some very good. However, not many of them can claim to actually offer something different; after all, it’s a keyboard, a thing that’s used to type words and there aren’t that many ways in which you can do that, right?

Well, Minuum seems to think otherwise, and it’s makers aren’t the only ones in that position, considering the fact that their indiegogo campaign has managed to amass no less than $87,354, with an initial objective of $10,000. With that sort of result, there must be something to it.

Well, the keyboard is now available to everyone, as you can now buy it from the Google Play Store, at $3.99. That’s all good, but what’s so special about it?

As you can see in the video below, Minuum offers a different, more minimalist approach to typing – it basically has the classic QWERTY keyboard layout, but it’s spread over a single row. Moving your finger across the areas with letters composing your desired word will make Minuum display word suggestions. It may seem strange but I’m sure that, after getting used to it, it’s pretty intuitive.

It may be a bit difficult to explain but, as you can see in the video, it actually works in practice. However, if you type in a different language than English, you’ll have to wait until support for your language is added, as English is the only language in which Minuum currently works.

What do you think of this style of keyboard? Would you use it if you were to get used to it?