It’s annoying when you want to download a new app or Android update only to see you can’t because you’re out of storage. Here’s how to reclaim space.

When you want to download a new app or get the latest system update on your Android phone or tablet, it is incredibly annoying to discover the device is out of storage space. If you find your device is low on space, here’s a look at a few simple, but effective ways you can quickly clear out the clutter and regain space.

Clean Up the Downloads Folder

Just like on your computer, your Android device has a Downloads folder that fills up over time. It typically contains junk files that you’ve downloaded via your browser or by other apps. To open it, open the app drawer and tap the Downloads icon (on some phones it might be labeled as Files). Then tap the items you want to get rid of and then the trash icon to delete the files. 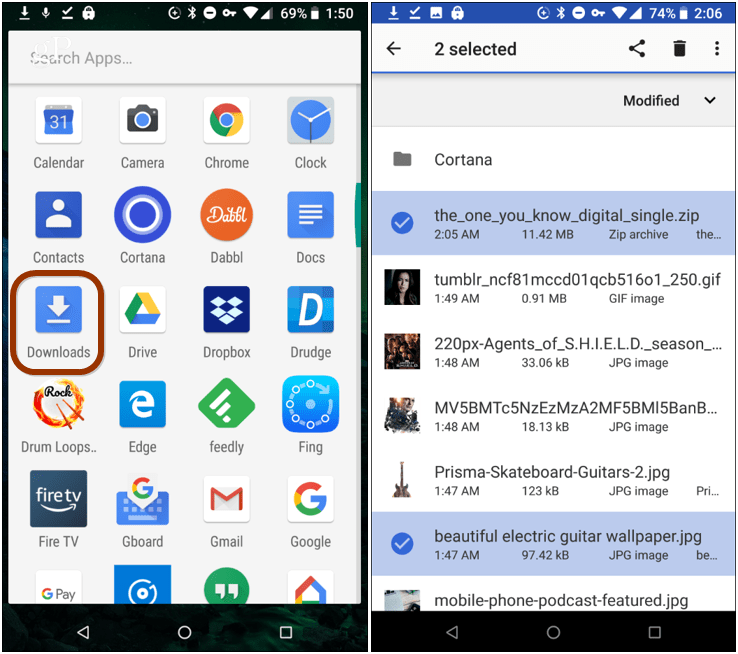 Just like with your downloads folder, there are probably songs or podcasts that have been downloaded via Play Music. Podcasts via Play Music are set to download by default, and unless you change the setting, they can add up in a hurry. Speaking of podcasts, it worth noting that Google has a new Standalone Podcasts app that makes it easier to manage shows. Whatever the case, cleaning out what you no longer need can help you regain a lot of space.

For Google Play, go to Settings > Manage Downloads. From the list of items, tap the one you want to remove and then verify you want it gone. Or, maybe you’ve downloaded some videos to view offline. Make sure to go through any other app you’ve used like Netflix or Spotify and clear out anything that’s been downloaded. The process varies for each app, but they all let you find and delete what you’ve downloaded. 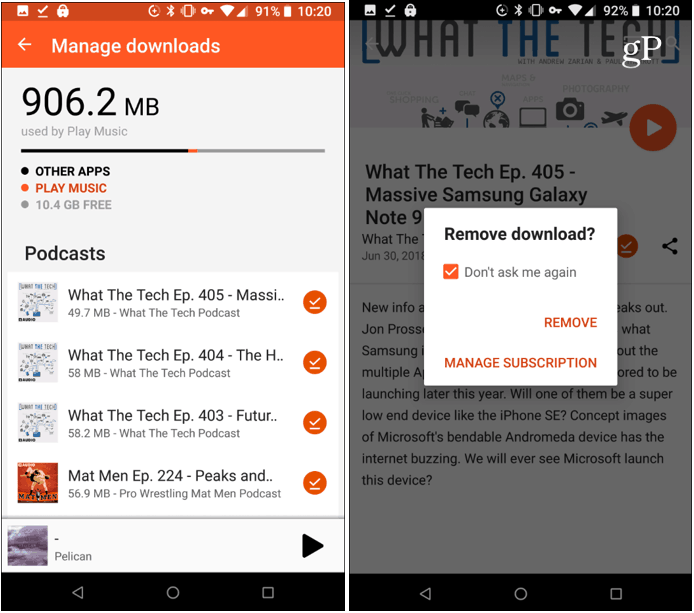 If you’re someone who received the Oreo update on your phone, you can take advantage of the built-in Smart Storage feature. Head to Settings > Storage and toggle it on if it isn’t already. From here you can also tap the “Free Up Space” button and wait for it to scan and then choose the items to remove. You can also set it to automatically remove backed up photos and videos that are 30, 60, or 90 days old. 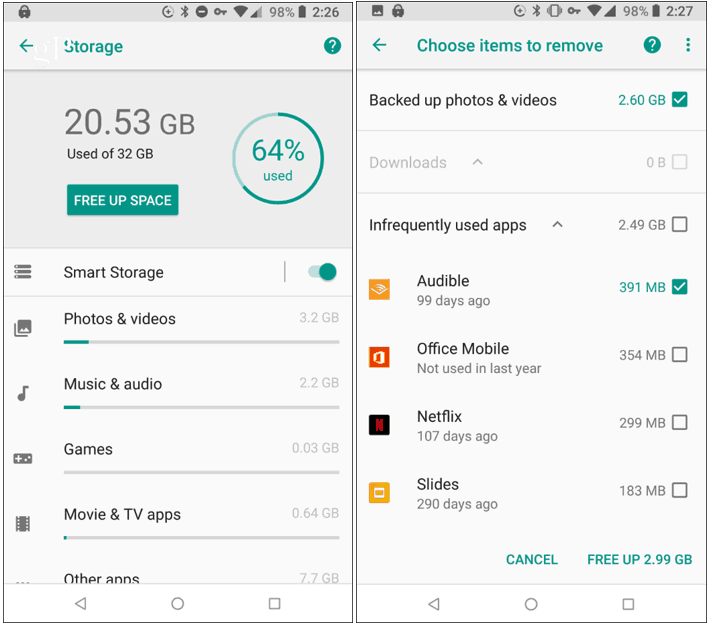 While cameras on phones these days provide quality high-resolution photos, the files are quite large. If you take a lot of pictures and videos, the amount of space they take up adds up in a hurry. The good thing is the Google Photos app will backup all your photos to Google Drive automatically. And for double assurance, you can set OneDrive to auto-backup your pics and vids, too. Once they’re backed up, unless you need the full high-quality resolution of a photo, you can delete them from the phone. Open the Photos app and from the options menu in the upper-left corner, tap “Free up device storage” from the menu. The Photos app will display the number of pictures that have been safely backed up and the amount of space it will free up. 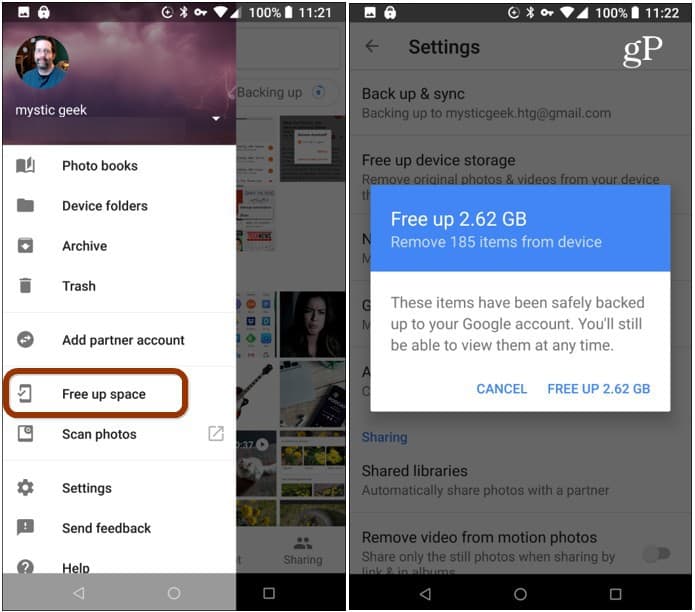 This one is pretty obvious, but when was the last time you went through your phone and took inventory of what you actually use. We’re all guilty of downloading apps and games, trying them once or twice, and forget about them. Every three to six months, open the app drawer and take a look at your apps and decide if you really need them. If not, get rid of them, you can always reinstall them later. To see all your installed apps, open the Play Store and go to My apps & games > Installed tap on the app and then the Uninstall button. If you’re on a modern version, you can simply drag and drop an icon from the home screen or app drawer to the trash can to delete it. 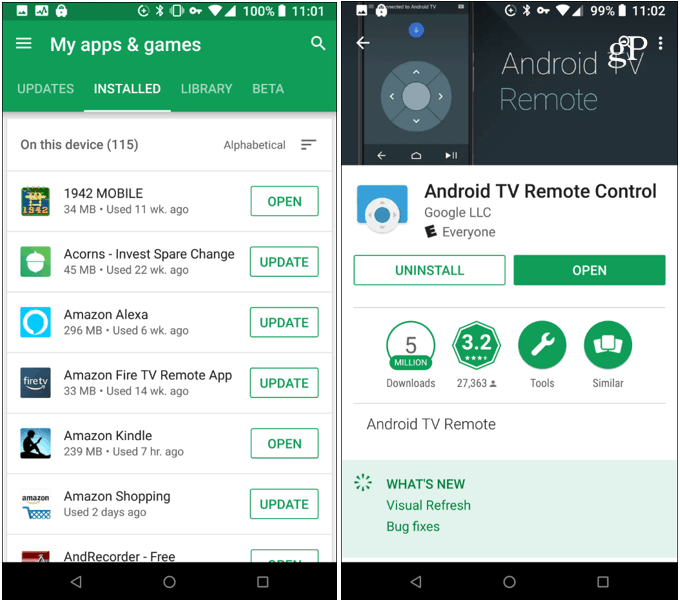 If you’re lucky enough to have Android Oreo on your device, the Smart Storage feature should keep things tidy enough that you won’t run out of storage space. So, make sure to have it setup and running. However, the other suggestions above will allow you to have enough storage, even on low capacity Android phones and tablets.