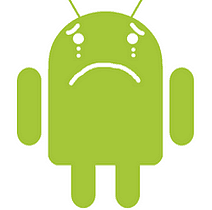 Losing your Android device or having it stolen is something you don’t want to happen, but if it does, you have to be able to locate it and, especially remove sensitive data from it. That’s what  the Android Lost app helps you do.

Let’s see how this great tool can be used. Start by installing the free app from the Google Play Store on your device. 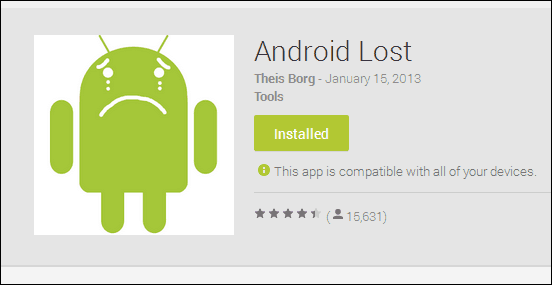 Now that it’s installed, you’ll notice that the app is called Personal Notes on your device (it does look a little bit less suspicious to a thief, I guess). Next, start it on your device in order to activate it. 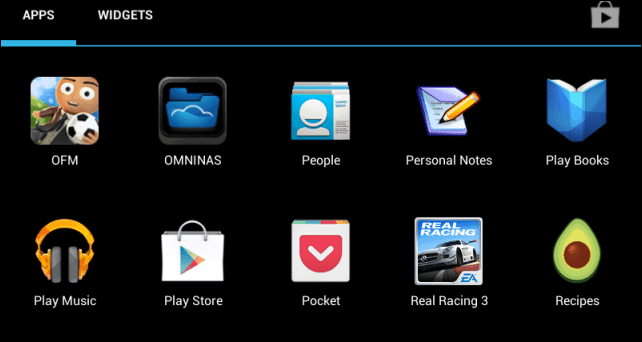 Once started, you’ll notice that it doesn’t have much of an interface (neither does the web service), but fact is that the service does get the job done, and that’s much more important. Just like a server, you just need the essentials to get things done, not a lot of GUI fluff. Once started, click Request Administrator Rights if you plan on using the app to remotely lock or wipe your device.

One more step to start using it – go to Androidlost.com and use the same Google account you use on your Android device to sign in to the service. You’ll have to give permissions for your account to be used here, too. 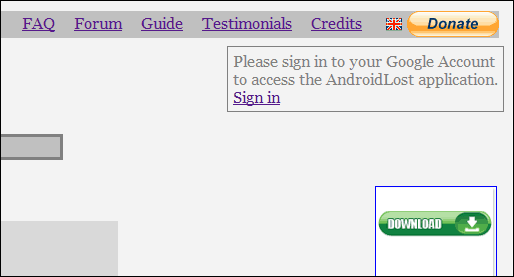 After that you’ll get a web interface allowing you to perform a plethora of operations on your device, split into categories like Basic, Status, Messages, Security and Mobile. Again, a bland interface but does what it needs to do.

The Basic section allows you to do things such as sounding an alarm (and a very annoying one at that) on the device, and you can even choose a file to play. You can also get the device’s location (and even turn on GPS remotely for more precision). You’ll get the location pinpointed on a map, so you can just go and get it. 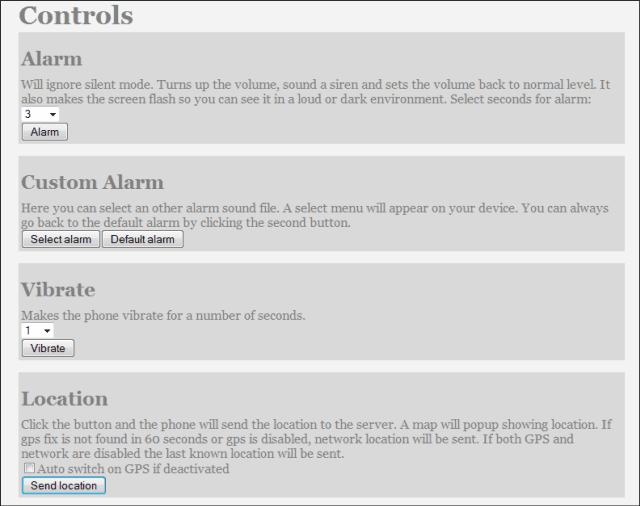 The Status section will allows you to get the device’s status, as well as to toggle WiFi, GPS or Bluetooth, as well as get your Android smartphone or tablet’s status. 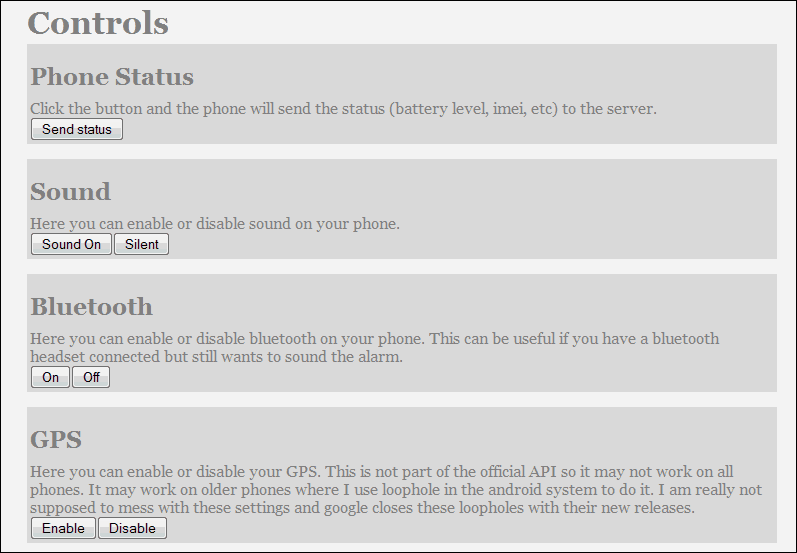 While the Messages section allows you to send various messages to the screen, its Message picture feature is probably the most useful one – it will send a pop-up message to the screen of the device, requiring the user to press OK to get rid of it. The moment he does, the device takes a picture using the front camera and sends it back to you. You can even get the last text messages sent and received on your phone, which could give you an idea about the thief. 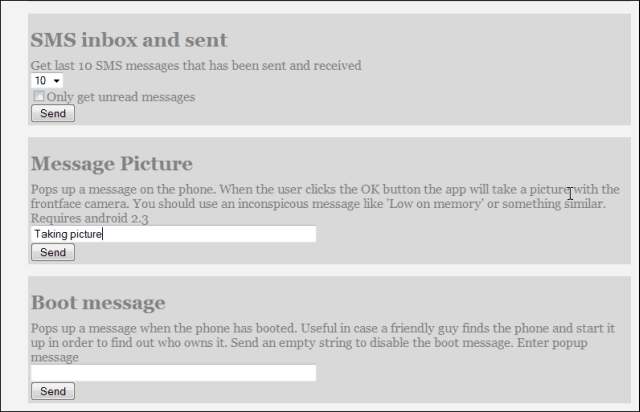 The Security section is probably the most important one, should you have sensitive data in your device – you can use it to hide the app in your phone’s menu (always a good idea), but also to wipe data from the SIM card or internal memory (you should probably do this only as a last resort).

It’s also possible, in case you think the phone’s internet connection is turned off or the Google account is blocked, to detect when the SIM card is changed. That way, commands can still be sent via SMS.

You can also lock the phone’s screen with a four-digit PIN (provided you’re not using one already). 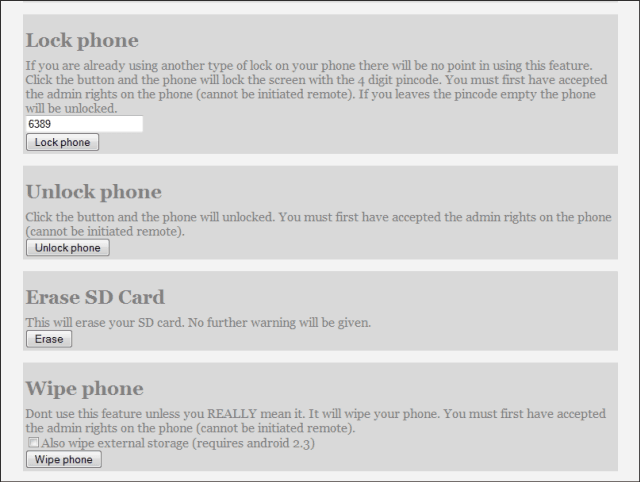 The Mobile section also has some groovy features in it – you can get your phone to say a message using text-to-speech (like “you thief, put me down or I’ll explode on you” – don’t laugh, that might scare some people), or take pictures with any of your phone’s cameras and have it sent to your email address. You can also record sound with the phone’s microphone, so you can get an idea on its whereabouts and you can even hang up the phone. 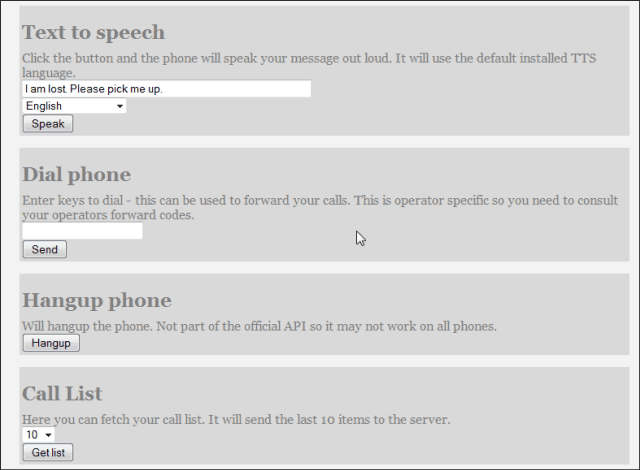 All in all, despite the not-so-good-looking interface, this is great stuff, and it could be incredibly helpful in some nasty situations. It can’t hurt to have it activated, just in case.

Another app that will remotely wipe your Android data is the Lookout Mobile app, but that does require the premium version. Speaking of security, make sure to also check out our comparison of three popular security apps for Android.